It’s not secret that I’m a fan of 3E/PF, and the basics of Five Moons are informed and inspired by 3E/PF. But as I go through the chapters of the Player’s Handbook and Core Rulebook, I keep running into rules that make the game a lot more complex and “realistic,” but I don’t really think they make the game better. Examples:

“A stable character who has been tended by a healer or who has been magically healed eventually regains consciousness and recovers hit points naturally. If the character has no one to tend him, however, his life is still in danger, and he may yet slip away.” [Followed by further explanation about each possibility.] Meaning that even though you can roll to stabilize yourself, or someone else can stabilize you, and both of them give you the “stable” condition, they’re actually two different “stable” conditions, one for stabilized-myself and one for stabilized-by-someone-else, with different rules and effects.

“Inappropriately Sized Weapons: A creature can’t make optimum use of a weapon that isn’t properly sized for it. A cumulative –2 penalty applies on attack rolls for each size category of difference between the size of its intended wielder and the size of its actual wielder. If the creature isn’t proficient with the weapon, a –4 nonproficiency penalty also applies.” I used to have a rant about this (when it was introduced in 3E), complete with photos of adult and child human hands (to represent Medium and Small creatures using Medium weapons) comfortably holding pencils, kitchen knives, swords, and baseball bats, all of which have different diameter handles, and all of which is fine because we have opposable thumbs. I’ve long been opposed to this rule because it’s one of those double-whammies where the game models the same thing twice (see footnote [3] of this blog post)… you take a –2 penalty for using a weapon of the wrong size, and you have to pay a “handedness” penalty on top of that.

From the Attack Roll Modifiers table: “Attacker is… on higher ground… +1 bonus on Melee attack rolls.” So a 6-foot-tall orc standing on a 4-foot-tall table (total 10 feet high) gets a +1 “higher ground” bonus to attack a 6-foot-human standing on the ground, but a 10-foot-tall hill giant next to the orc doesn’t get a “higher ground” bonus against the human, even though the hill giant and the orc are attacking from approximately the same height. (And the giant also has a –1 size penalty to attack the human.) (And because going out of your way to climb on a table in order to get that +1/+5% bonus on your attack roll is really worth it.) (And the orc would get full AC value of its shield against the human, even though the human is mainly attacking the orc’s legs.)

Buried as a footnote in the Equipment chapter’s Armor For Unusual Creatures table: “[For] Tiny or smaller creatures… *Divide bonus by 2.” So that Tiny pixie wearing half-plate doesn’t get the +8 armor bonus to AC, they only get a +4 armor bonus to AC… presumably because Tiny half-plate is more like aluminum foil than hard steel… but deflection, natural armor, and other AC bonuses are at full strength no matter what your size is. Also, note that there’s no corresponding increase to armor’s AC for a Huge or larger creature, even though a Huge creature’s armor is probably significantly thicker than a Medium creature’s armor.

When I was on the design team at Paizo, I’d often have developers come to me with rules questions in order to make sure they were interpreting something the right way for an adventure or sourcebook. There were many times when we’d finally reach the answer after a convoluted bunny trail of rules precedents, and I’d end with singing, “the game is too complex dot commmmmm.”

Because the game is too complex. There are rules in it that the designers have forgotten about–rules that are great if you’re trying to closely simulate reality, but aren’t so great if you’re just trying to have fun in a fantasy world that routinely breaks reality’s fundamental laws.

Obviously, the rules I quoted above aren’t going to be in Five Moons RPG.

(Don’t get me wrong. I loved playing 3E and liked running it… but we’ve all learned a lot in the 14 years since it was published, and personally, one of those things I’ve learned is “there are a lot of rules that don’t really add much to the game, so why keep them?”) 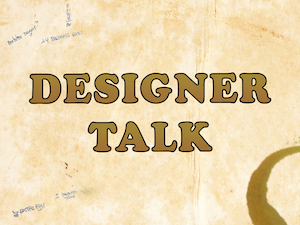 20 thoughts on “Designer Talk: When the Game is TOO Complex”